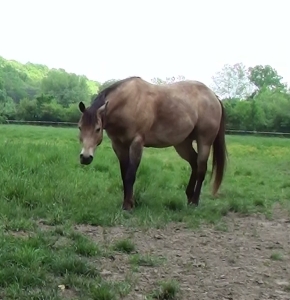 Last night in class my mentor suggested that the most effective change I could make about the way I interact with my horses is to develop Galahad’s gas pedal—his willingness to get up and MOVE when I ask him to. I have been getting better about it. Just this semester, something in me has clicked and suddenly I’m able to use my body language to move him, not just the whip or reed. That’s been enormously helpful.

So I can get him moving…but then, as is so clear from my class videos, I quit asking as soon as he moves away. I don’t follow through. As a result, Galahad has figured out that I won’t really ask him to go very far, and he doesn’t take me too seriously. The game, as far as he’s concerned, is to go away only as far as he absolutely has to. Then, almost immediately, he circles back. He loves games.

Well. Today I went out to spend some time hanging out with him in the pasture before his appointment with the vet for the annual “teeth-and-sheath” event. Unfortunately, I had treats in my pocket, and Mr. Nosy found them. He would not leave me alone. What a pest he was! So I realized I needed—wanted!—to send him off. “Great,” I thought. “I’ll practice!”

Ahem. I sent him off, and just like always, quit as soon as he got about 20 feet away. Yes, I know—I was going to be more insistent and follow through. SO hard to break old habits. And yup, sure enough, he came right back.

And just then—I could hardly believe the timing!—Charlie, the Bossman in the geldings pasture, decided to move Galahad’s friend Dancer off. And I mean, Charlie MOVED HIM OFF. Head snaking, teeth bared, full speed ahead: Dancer took off like his life depended on it (as it might have done). Charlie kept after him for fifty yards or so, then skidded to a stop like the good Quarter Horse he is. Then he stood there, watching Dancer continue to run. After a while, he started grazing.

I’m telling you, the timing was SO suspicious. I swear, Charlie was showing ME how to do the job! Point taken, Charlie my friend.

So I took off after Galahad, doing my best to emulate my “teacher.” Galahad was shocked! But he did run. I chased him a lot farther than usual, then stood there and glared at him. When he dropped his head to graze, still watching me, I finally turned away, but I did NOT back up.

A few minutes later, Galahad started walking back toward me, just like he always does. So I chased him off again! This time he went faster and stayed away a little longer, but he still came ambling back pretty quickly. One more time, I made him run away and stood there, daring him to come toward me.

Finally, he got the message. I waited quite a while, and he didn’t come back, didn’t look at me directly, just stood “over there” and ate grass.

When the time came to get him for his appointment, I walked over to him, greeted him, and walked away. He did NOT follow. Nope. He stood there looking at me, head down, waiting to see what I was going to do. Good boy! When I called him over, he hesitated a second, then came slowly over to me, dropped his head into the halter, and followed me quietly out of the pasture.

Wonder if I can remember Charlie’s example the next time? I will try. Because I have no doubt that Charlie will be watching.

Horses are such wonderful teachers!