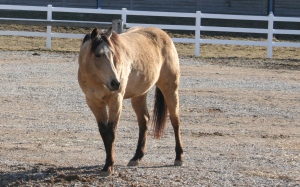 The other afternoon, after Nevada’s lesson under saddle (a whole ‘nother story), I brought Galahad out of the pasture. We stopped by the outdoor arena, where he wandered around and rolled; then we went and got him his dinner by the car. I was tired and needed to get home for an evening with friends, but he wasn’t ready to go back to the pasture. The arena was still empty, so we went back in.

They have that particular arena set up for practicing barrels, so Galahad and I went and looked at the them. I decided to try to get him to circle one of them—maybe he’ll enjoy “running barrels” on his own some day—and at first he thought I wanted him to touch the barrel. I said no, “go around” with a new hand signal I made up. That meant he had to figure it out. He loves that! So he tried a few options.

So I showed him—got him to follow me around it. And the light bulb went off! I wish I had video of that—it’s just so clear in his body language when he suddenly understands what I’m asking. So he went around! Then we walked to the next one, and I said, “go around.” A bit tentatively, he first touched it, but then went around it…and we went on to the third one. He went around this one right away. Got it! Good boy!

He loves it when he’s been “good.” He gets very proud of himself, I swear.

I am super careful with this horse not to “drill” anything, so I was going to stop and take him out to the pasture and give him a carrot on the way. But he wasn’t ready to go. He paused at the barrel, looking directly at it. “Can I do it again, please?”

Any time he shows an interest in doing something again, I encourage him, so we “went around” a couple more times—that barrel and the next one. After that, he was willing to leave.

What a good boy! It is a lovely feeling to know that there are things that are such fun for both of us, where we can improve our communication.

I sure love this horse.