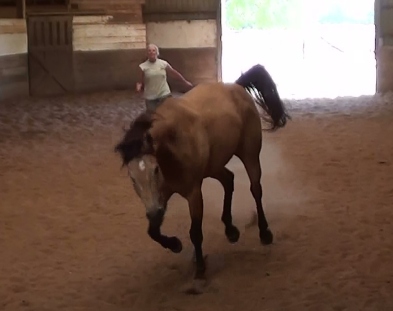 I had such fun with Galahad yesterday afternoon. We ran around just a little in the big arena by the pastures, but it was way too hot for me to chase him and persuade him to do much more than trot. He was happy, though. Then I took him down to the outdoor jump arena by the indoor arena, and since no one was there, turned him loose.

Not such a good idea. First of all, there were two mares in an adjacent paddock. I should have known better, but was focused on “doing stuff” with my horse. Still learning to PAY ATTENTION from the horse’s point of view, after seven years….

He got all puffed up and full of himself and decided to show off for them. One of the mares took offense at something he said to her and squealed mightily. I discovered later, from the bloody gash under his mane, that she also took a chunk out of his neck. (He does know how to court a mare, when he has a mind to do it.)

He huffed and chuffed and snorted all over the place, then pranced out of the arena (!) through a gate I didn’t even know was there. It leads to an alleyway along the side, probably where they would move their calves around when they used to do calf-roping. The fact that it was narrow and fenced on the other side made the opening all but invisible to me. Oops…. But fortunately, he got sidetracked by the yummy clover in there, and I was able to get his halter back on before he wandered into the cattle pen. After that, the halter stayed on. Enough adventures.

I love how Galahad has developed so much self-control the last couple of years. As I walked him out, I could feel him vibrating, on the edge of a head-toss and a prance and maybe a rear—but I spoke quietly to him, and he didn’t do any of it. Such a wonderful fellow he is. (And this makes me absolutely certain that I could ride him if I weren’t afraid to do it. One firm word to him from on his back, and probably a one-rein stop and some disengaging of his hind end, and he would be just fine.)

After that we went into the big indoor arena to look at stuff and walk over one of the little jumps. He was willing to do that on the lead, but once the other horse and rider left and I took off his halter, not so much. But that’s OK. I only asked him for what he was willing to do. He had fun, got to roll in the sand, and felt good about what he did for me. That’s all I want. More willingness will follow as we work more and more together.