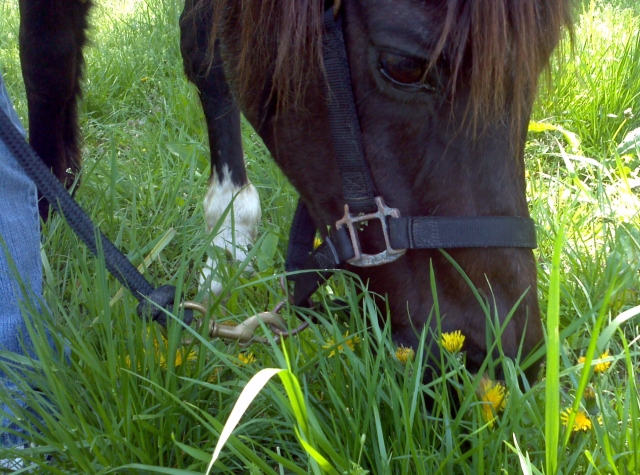 On the 31st of March, a phone call, the kind you never want to get, roused me from the comfort of my Saturday-morning coffee in bed. Midnight was down in his paddock and couldn’t get up.

The day before he had been prancing around like a youngster, and the evening before he had eaten his dinner with relish, as he always did. He had a great time enjoying one of the first spring-like days we’d had—sunny, warm, windy, cool.

As near as we can tell from the timing, that cold Saturday morning he had gone out to roll in the dirt like he always did before breakfast, but his body just wouldn’t cooperate to get him back up. The staff found him when they went to feed him.

In part the problem was his elbow, the one that was broken several years ago. That leg never regained its full strength. But it wasn’t just that. His swayback had been getting noticeably worse in the past year, and I think he just didn’t have the muscle power there, either, to get himself up off the ground.

By the time I got the message (I’m not Midnight’s actual owner) it had been about an hour since they found him and realized he was in trouble. By the time I got to the barn, they had been pushing him, pulling him, dragging him around, turning him over, and fighting to save him for nearly two.

Midders, though he had been working with the vet, barn staff, and his owners, was exhausted—it was clear from his eyes. He was glad to see me, and gently lipped the end of my scarf and sniffed my hand. He and I go way back, and I’ve nursed him through many an illness and injury. But this one felt different.

After a couple more tries, Midnight just quit. There was discussion of bringing in the local, wonderful large-animal rescue team, which has an a-frame and a winch; but in the end, the decision all of us came to was to let this old guy go with some dignity. I stayed with him to the end, hoping to offer some comfort. He passed so peacefully….

It’s always such a terrible and awe-full decision to put an animal down. This one was no different. But to all of us, it felt right somehow.

Midnight had a warrior’s spirit. We might have gotten him up on his feet that morning, and he could have overcome this incident. But then what? What would have happened the next cold morning when he tried to roll? And the next? Though no healthy animal ever dies willingly, I believe in my heart that this valiant fellow, like any warrior, would rather have gone out in battle, whole and fighting, than have crept off into death toothless and frail from some forgotten spot by the hearth….. This was the end he would have preferred.

He has visited me since his passing, and all I can feel from him is joy….

Bless you, Midders. You are sorely missed, but everyone who knew you is grateful for your presence in their life.