Great news—Galahad is back in the pasture!

After four hot nights in the barn, Galahad decided one evening that he was ready to go back out. I took him out of his stall and, as usual, he went first to check on his buddy Dancer across the aisle. After a good sniff, he headed out of the barn and practically dragged me out to the pasture gate. When I turned him loose, he ran over to Stewart and Moose, said hello, and immediately started grazing right next to them. So I let him stay. He was fine when I checked on him an hour later, right before heading home for the night. 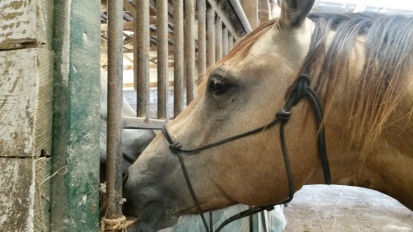 It was HIS choice, which is how we roll most of the time these days. Poor Dancer was still in jail, but Galahad was done with confinement.

I was vastly relieved. Keeping a pasture horse confined temporarily is a big job—twice-daily walks, extra hay and water, and the worry! Fretting about him standing around all day, bored out of his mind, when he’s used to walking almost constantly and watching all the goings-on in the world…plus the heat in the barn. Even though there’s a ventilation system in there, it’s stiflingly hot.

Anyway. The next morning I went out to be sure all was well—he was fine, though sporting a slice or two from someone’s hind shoes. And he was so sleepy—he’d had no special buddy to watch over him while he slept, so he likely didn’t dare. But Dancer got to go out that afternoon, when the weather finally broke. Thank goodness!

Here’s a link to a video I took right after Dancer got done racing around the pasture, which didn’t take long. It was still hot! These two were obviously SO GLAD to be back outside, and in each other’s company.

Anyone who says that horses don’t have deep emotional lives has never paid any attention to them. But so many people really have no clue. These are not animated motorcycles, folks…. If you want something to catch, ride, and put away until next time, get a scooter.

The following day the weather finally broke. The temperature dropped to the low 90s (from 108 degrees!) and even better, the humidity was down, too. I was able

to spend four blissful hours in the company of my horse and his friends, which I haven’t been able to do for months, and live to tell the tale. And it’s been forever since Galahad has been able to nap with me like he loves to do. There’s not much sweeter than the hot breath of my best boy as he dozes next to me.

Wow. I am so blessed.