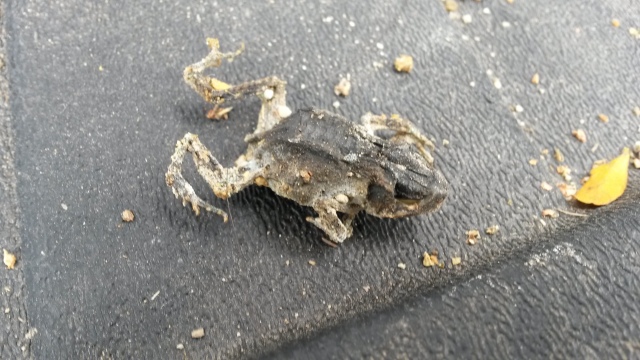 About a month ago we noticed that Midders was spending time licking the ground at one particular spot in his paddock. That sounded like a mineral deficiency of some kind, so we put out a small pan of salt and loose minerals near his chosen spot.

The first few days we only put a little bit in there, and he’d empty it by the next morning. Now we leave half an inch or so in the pan, and he takes what he needs. Problem solved. For Midnight, anyway.

Over the weekend they got a little bit of rain at the barn, and on Monday when I went to refill Midnight’s mineral dish, there had obviously been some standing water in it. It had since dried up, and I noticed what looked like a dried leaf in there. When I picked up the “leaf,” though, it turned out to be a little mummified tree frog.

I was horrified! What a dreadful way for the little guy to go, poisoned by Midnight’s minerals! Frogs are so fragile, with their delicate skin, and this little guy never had a chance. Wow…I felt SO guilty…. Collateral damage….

Anyway, I picked his stiff, shrunken little carcass out of the pan and set it in the back end of my car. There he rode for a couple of days while I contemplated putting him on my “curio shelf”—that spot in my office that contains feathers, a deer jaw, some shells, an empty wasp nest, some interesting sticks, a dead dragonfly, and other curiosities. (Some kids never grow up, right?)

Then I forgot about him. Such is the life and death of a tree frog, I guess.

Galahad, meanwhile, has had some kind of grunge growing on his legs since late winter. It was going away, with treatment, back in March when Nevada died and I quit paying attention. Now it’s mid-summer and he’s still scabby and itchy, but fortunately for him, I’ve kicked back into gear and am doing the cleansing-and-treating routine again, and making progress.

So the other day I had him down near Midnight’s area, tied to the fence while I scrubbed and treated his legs. Once that was done, I turned him loose and went to put away my stuff and feed the Old Man while Galahad grazed nearby.

Then I happened to look toward the open back end of my car, and of course Galahad had his head in there. That’s where all the good stuff is, right? But what on earth was he eating? I knew that everything was covered up, but he was doing that licking, head-tossing, contemplative thing that all horses do when they taste something for the first time (horse friends, you KNOW exactly what I mean).

And then it hit me…. No, it couldn’t possibly be….

Yep. He was eating the frog. That dried-up, mummified frog that had been sitting in the back of the car….

And he ate it. He didn’t spit it out. Nope. He chewed it up and swallowed it, then went looking for more.

OMG. My horse is a closet carnivore.